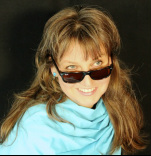 Danièle Chevrolet
Born in 1964, the comedic actress followed a hands-on approach during her ten years in Geneva, where she also provided assistance, help with directing and adaptations of texts on some projects. In 1990, under the artistic direction of I. Niculescu in Geneva’s “Théâtre de marionettes”, she discovered the art of puppets and decided to dedicate herself to it.
After settling in the Valais, she founded in 1997 Cie Cosmopolite, a show-creation company for all audiences. During six years, along with José-Manuel Ruiz, she created more than ten shows, performances and theatrical events. With the Company Héros Fourbus, she’s been designing and playing since 2007 the show Les 7 rêves de l’Absent (The 7 dreams of the Missing-one), and in 2010 Dehors devant la porte (Outside in front of the door), an adult-only puppet show. Alongside this, she keeps designing shows for all audiences, including Gare au Loup! (Beware the Wolf!) and L’étrange voyage de M. Victor (The strange journey of Mr. Victor).

Born in 1965, José-Manuel Ruiz answered the call of the entertainment world in Geneva on March 25, 1985. At first he was a Concerts and Event’s Organiser, a Lighting Designer and Scenographer, and during these first 17 years his work, he mainly focused on light and space. Then on February 12, 2002, he finally took the plunge with his partner Danièle Chevrolet and went on stage as a Puppeteer. Since then, always in the world of objects and puppets, he’s been on stage during many performances and shows. Since 2007, he’s the sets, puppets and lighting’s creator and designer within the Company Héros Fourbus. Simultaneously, he continues his research of shadows in stage lighting. Also, he’s been co-manager of the “Petithéâtre de Sion” since January 1, 2007.